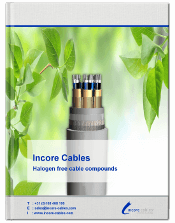 The most notable fire event is the King’s Cross Fire that killed 32 people in London’s underground railway. It was found that the majority of fatalities were caused by toxic gas and smoke inhalation rather than from the fire itself.

Cable manufacturers responded by developing materials that were highly resistant to fire with a considerably lower toxicity rate than halogenated cable materials. Eventually this resulted in the development of halogen-free cables which are nowadays utilized in many industries such as offshore, military, hospitals and many other confined-space applications.

In this eBook you can find the following content:

Fill in and receive the eBook

We are specialised in electrical and instrumentation cables. Our engineering
allows us to develop new, and improve existing cables. We have large stock
levels that guarantee a fast delivery. Standard cables, custom or assembled
as desired, we offer the solution for many markets and applications.